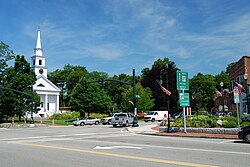 Sharon, first settled as part of the Massachusetts Bay Colony in 1637, was deemed the 2nd precinct of Stoughton in 1740. It was established as the district of Stoughtonham on June 21, 1765, incorporated as the Town of Stoughtonham on August 23, 1775 and was named Sharon on February 25, 1783 after Israel’s Sharon plain, due to its high level of forestation